‘Shrimad Bhagwad Geeta’ is the advice offered by Lord Krishna Himself, the eighth Incarnation of Bhagawan Vishnu! The – Advice offered by Him is Geeta; its exact name ‘Geeta – Upanishad’!! Bhagawan Shri Krishna is ‘the form of Parmatman’, the Supreme Soul, Yoga Yogeshwar, the Supreme Yogi! Thus He, Bhagawan Yogeshwar Krishna and his song known globally, Bhagwad Geeta are both one and thoroughly united in spirit, a supreme example of spiritual Unity, a symbol of Non-duality; exactly and entirely the same as Union of Lord Shiva and His Shakti – Feminine Principle. We can say that this is the supreme illustration of Non-Duality!

Dearest and nearest to the heart of all of us, Bhagawan Krishna, Yogeshwara, Lord of Yoga and Yugandhar, The Support of the Epoch – What is He in Reality? Exactly, we can say that He is the founder and Support of TRUTH, the Universal Being. He represents SATVA, the best of the three Universal qualities. HE is Yuga Pravartaka, the initiator of a New Epoch, Pinnacle of Personality, dispenser of Strength and Prosperity. He is the embodiment of Dutifulness. He is the emperor, devoid of any need for Himself! A beautiful combination of Abhyudaya, sustenance needs of society, and the needs for Nishreyas, transcendence! Thus He is the total embodiment, Purnaavatara of the Universal Dharma, Duties and Responsibilities enjoined by the Bharatiya Culture. He Himself is Purushottama, Best among Men, a perfect Person, described in the Geeta, loved by people.
Basically our Bharatiya Sanskriti is a threefold culture like a three petaled Bilva leaf, Rishi Sanskriti, also it is an agriculture based, Krushi Sanskriti; also based on Faith, Shraddha. Important fact is that Bhagawan Shri Krishna is the embodiment of this threefold Sanskriti. Thus we note that Bhagawan Shri Krishna himself has taught the whole country, the Yoga of Knowledge, Gnana Yoga of Rishi Sanskriti; Karma yoga of the Krushi Sanskriti and the Faith based Bhakti Yoga. The most important fact we can see is that he himself is the embodiment of the philosophy of the Threefold Yoga, which he has presented in the Geeta!

It is for this reason that in our sacred, beloved Motherland, Bharat, for the last five millennia Bhagawan Shri Krishna has earned a loving throne in the minds of the people, both Men and women. On the one hand He is the central Character of the Mahabharata written by Vyaasa Muni, and He is also the Supreme guide for making Bharat, a Great Nation for today’s citizens. In order to achieve this goal of Great and Strong Bharat, all of us have to keep in our minds the ideal of Bhagawan Shri Krishna; philosophy is of equipoise – supreme yoga which all of us have to internalize in our mind and heart and have to put in practice in our lives this Yoga, as our supreme duty of our lives, actualize it. This is why it has to be our great guiding Principle of our lives!

It is the great luck of our life that we have inherited the Geeta, the supreme song by Bhagawan Shri Krishna. This is the Geeta, the scriptural embodiment of Bhagawan. As Shri Gyaneshwar Maharaj has said, “Know that the Geeta is the embodiment of Lord Krishna Himself”. Each Shloka – verse of the Geeta unfolds Shri Krishna’s form! It is our further good fortune that Bhagwad Geeta is His own biography, unfolding the philosophy of the Geeta by his own example. It should be noted that we cannot understand the Geeta without really understanding Shri Krishna and vice versa. Both, Life of Shri Krishna and Bhagawad Geeta, are the roads to take the human society from ‘Vishaada’ – depression to a blessed state. This process is going on for generations of people of Bharat to the whole Humanity.

We can observe a few specific points in the internal and external aspects of the Bhagwad Geeta. It is obvious that Bhagwad Geeta is a part of The Mahabharata. But where exactly the Geeta happens to be placed? According to the well-researched edition of Mahabharata published by the Bhandarkar Institute of Oriental Research – Pune, the chapters 23 to 40 of the Bhishma Parva of Mahabharata have become the teachings of the Geeta. Further according to the index of subjects given in Adi parva of Mahabharata, there is a mention of the Geeta. In other parvas also there is a clear mention of the Geeta at seven different places. Similarly entire Shanti parva and Anugeeta in the Ashwa Medh Parva seem to be written according to the content of Bhagawad Geeta. In the forty first chapter of Bhishma Parva (i.e. after conclusion of the eighteenth chapter of the Bhagawat Geeta) there is clear mention that war cries were resumed once again.

Similarly among the entire 700 shlokas of the Geeta, 575 shlokas are of Bhagawan, 84 of Arjuna, and one shloka is of Dhritashtra. Similarly the chapters 1 to 9, the first half-Purvardha – of the Geeta contain 372 shlokas, and the second half – Uttararadha – contains 328 shlokas. Thus Bhagawad Geeta is made of 700 shlokas. 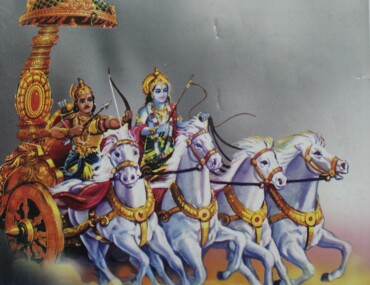 Shri Krishna and the Importance of Geeta – Part 2 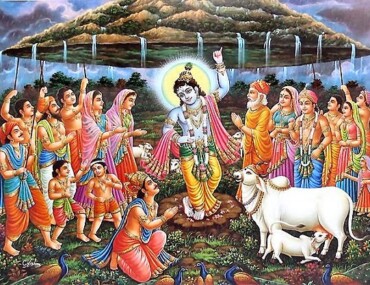