Swadharma: its Position and Direction – Part 1

Hence all of us should know what is our exact position and direction. Acharya Vinoba has told us an important point at the end of the first chapter of ‘Geeta Pravachane’, which is ‘All of us have to be Arjuna, if we are to clearly understand the message of the Geeta. What is the meaning of the name ‘Arjuna’? It is one whose nature is ‘ruju’ – soft is Arjuna. Actually, the dialogue in the Geeta is very special. The reason is that Arjuna, with his ‘riju swabhava’ placed before Krishna, whatever thoughts and feelings arose in his mind and heart. He did not leave out anything. Finally at the end, he entirely surrendered himself to Krishna.

Really Arjuna was already dedicated to Krishna. When he chose Shri Krishna as his charioteer, he had given control of  horses in the hands of Shri Krishna. Along with this, he had also made ready to surrender the control of his mind also to Krishna. All of us also need to do the same in the battle of our life. What special traits this hero of Mahabharat, Arjun who was the best among warriors and among the intelligents had? (pg. 24-26) Vinoba says in his Valor Pravachane,   just as Hanuman was a dedicated devotee of Rama, Arjuna was also well-known for his devotion to Shri Krishna. Truly Arjuna and Shri Krishna are in the same relation as Nara and Narayana, (Man and God). As it is, Mahabharat begins with salutations to Narayana and Arjuna, the best among men!

This pair of Krishna and Arjuna is full of valour. Arjuna’s another is ‘Vijay’, meaning – Winner. Arjuna himself is ‘Krishnamaya’ – i.e. totally merged with Krishna. This is his uniqueness. There is an early reference to this quality by the name ‘Arjunaka Sampraday’ – as a sect. being totally merged with Krishna was their aim and special trait. Just as there was Vaasudeva Sampradaya, similar to that, this Arjunak sampraday has been mentioned by Sage ‘Panini’. He has said that Haribhakti, devotion to Hari, (Krishna) is the acme of this sect. Valorous Arjuna has another great quality, supreme activity! He had full control on his senses, achieved by absorbing the true teaching of Shri Krishna, Savyasacaachi ! He is said to be Gudaakesha, having full control over the sleep! He has control over his mind, and thus he truly is a veera – valorous!

Bhagwad Geeta is the teaching imparted by Shri Krishna to Arjuna on the battlefield of Kurukshetra, but the teaching is also equally important for us in our life in general, which we should meticulously observe in our daily life, on the Kurukshetra of our mind, of our social life; All and every one of us are on the ‘Dharmakshetra-Kurukshetra’ of our swadharma, swa-kartavya. It is our good fortune that Vyasmuni, has introduced blended ‘Shrimad Bhagawad Geeta’ appropriately in his epic Mahabharata. Rain falling on the high peak of a mountain, has to come down in the form of a river for the benefit of all of us in the society. That has happened here. Bhagawan Shri Krishna has imparted the nectar of Geeta teaching on noble hero, Arjuna! But Vyaasamuni has compiled it for the benefit of people in general, like you and me, thereby he has granted a great boon on human society.

Again what is the meaning of ‘Krishna’ in the name of Bhagawan Shri Krishna? Krishna means attractive, one who attracts, wins us! Thus Bhagawan Shri Krishna also keeps the minds and senses of his devotees, on the path of devotion. He flowers our sense of discretion. For ultimately every person’s knowledge itself is his Krishna, who resides in his heart! We have to make Him our supreme guide, ‘The Guru’. then we have to take the highway of appropriate action shown by Him. Thus we shall be able to understand our Geeta, the supreme true Geeta of our life, for each one of us.

To this end we should understand, absorb the true meaning essence of the Bhagwad Geeta. What is this essence? It is ‘understanding the knowledge of our own ‘SELF’ and establishing ourselves in ‘Samatva Buddhi’! If we can absorb this essence of the Geeta, then we are completely freed from the feeling of depression, and it is replaced by ‘Bliss’, the result of this nectar in our life. It puts an end to conflict and is replaced by equanimity. Vishaadyoga is transformed in Prasaadyoga, the blessings of Harmony in our life. This is the magic of the teaching of Bhagawad Geeta. It is all encompassing. The main reason of this result is, Bhagwad Geeta has, along with the Brahma Vidya, but within the scope of this Aatma-gnyaan, given us the key to live our life in this world and society in an exemplary manner. Such is the greatness of the Geeta. 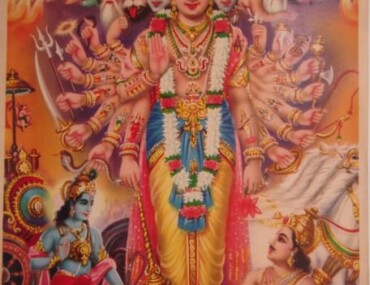